At the end of August, I was very fortunate to see the workshop version of a new play coming to Toronto in 2015. Titled “The Watershed,” this docudrama was commissioned as a featured piece for the Pan Am Games, taking place in the city next summer. Its content is focused on the Experimental Lakes Area (ELA) and the political controversy surrounding its fate in 2012-2013. If you are unfamiliar with this particular series of events, I encourage you to read more about the political turmoil over funding and the rushed closing of the ELA that was occurring at the time. The play chronicles the researchers, activists, political, and industrial figures that were involved in this tale, including a highly critical view of Stephen Harper which I greatly appreciated. In fact, this play didn’t spare any political punches and considering its own funding sources and purpose, I found that both surprising  and refreshing.Personal anecdote: I actually went to see David Schindler speak at the University of Waterloo this past spring as a kickoff to a workshop intended to chart the future of the ELA, now under the management of the International Institute for Sustainable Development (IISD). While in the process of absolutely fan-girling out to see Professor Schinlder, a recipient of an Order of Canada and the Stockholm Water Prize, speak, I found myself seated next to Diane Orihel. Yes, Nature’s Lady of the Lake, the women who set aside her PhD work to leap into action, founding the Coalition to Save ELA. I encourage you to read about her story should you find you find yourself in need of inspiration and the willingness to act. Personally, I was never so happy to attend a talk in my entire life; the people I met and words spoken that day gave me the energy I needed to propel myself over the Master’s finish line a few months later.

Schindler’s talk and “The Watershed” touched on common themes: the intertwined nature of politics and the environment and the need for scientists to have media literacy. These ideas have been creeping into my conversations with my fellow water scientists and engineers more and more recently. Perhaps it is that I am less entrenched in the science side of things or have matured to take in more of a big picture perspective on the issues I’m working with, but it definitely appears to me that more and more when the topic of environmental science emerges, politics cannot be far behind. An example of this would be the Pass the Mic workshops help by the Canadian Water Network for young professionals and students to develop their media and public speaking prowess. There is a need more now than ever for scientists to convey not only their findings, but the significance of those findings and demand that necessary changes be made. David Schindler has been doing this for decades and we should all be following suit.

Back to “The Watershed”: I want to make people aware of the project if you hadn’t heard of it already – it is really amazing. It was validating and inspiring to see Canadian freshwater issues explained so well and in such an engaging and artistic way. I have such an appreciation for the docudrama style. As a self-titled ‘water outreach person’, I am always looking for ways to educate and inform the public, not always a willing audience. I feel like the combination of art, science, and activism portrayed in “The Watershed” is a fabulous way to entertain, educate, and inspire change.

After seeing that play, I had a chance to speak to the playwright, Annabel Soutar. Her previous work, “Seeds”, about a lengthy legal battle between a Saskatchewan farmer and Monsanto received rave reviews when it was released in 2012. I encourage you to learn more about her work here: http://porteparole.org/en/. Having only seen the first two acts of “The Watershed” thus far, I certainly know what I an excited for going into the new year. As I obtain information regarding ticket sales, I will be sure to share it along to my theatre-going and water-loving friends alike! 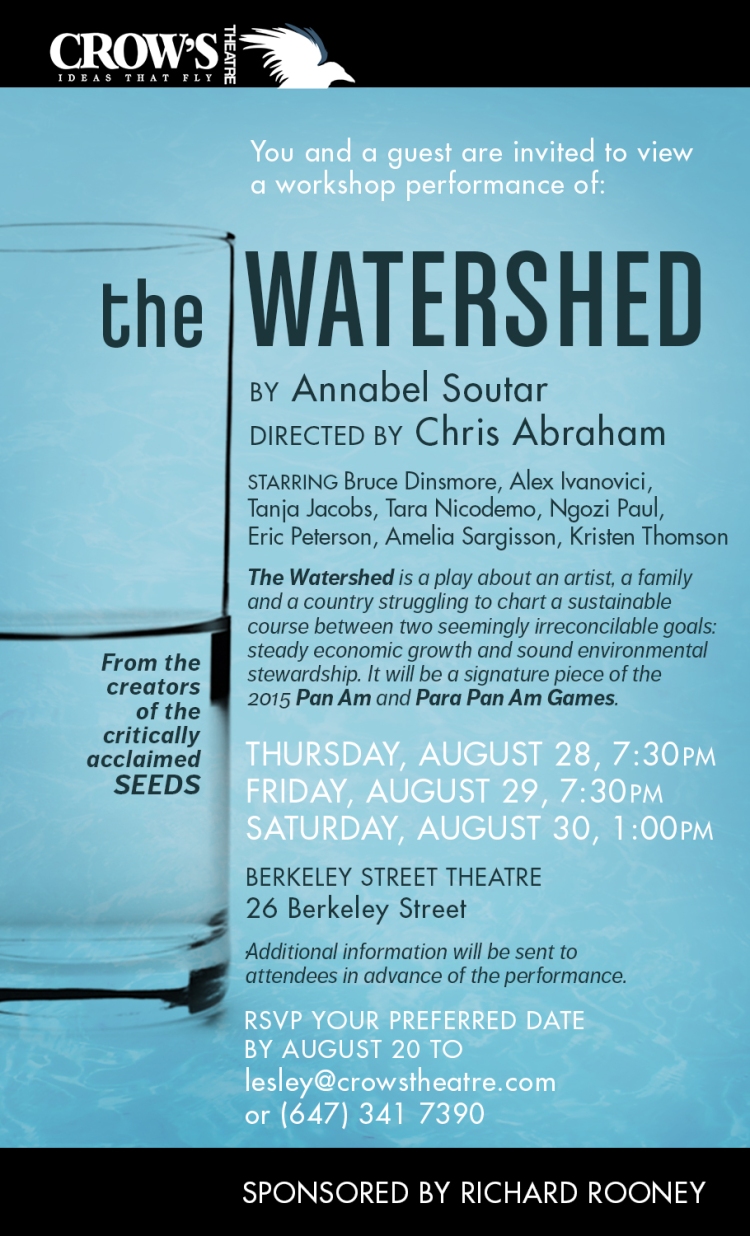