After much difficulty obtaining land access permission, quotes, contractors,  and locates, we have finally been able to start drilling on site. Thus far, we have installed 3 Solinst CMT multilevel wells, each well containing 7 ports located at a different elevations. The hope is to install thermistors and pressure transducers within each port to track the movement of water during a long term pumping test. The wells are drilled to specific depths and exact locations to capture different things, including the induction of flow in the adjacent creek, the dynamics between wells, and the overall regional flow field changes due to pumping.

With the rig in place, drilling started on the first well. 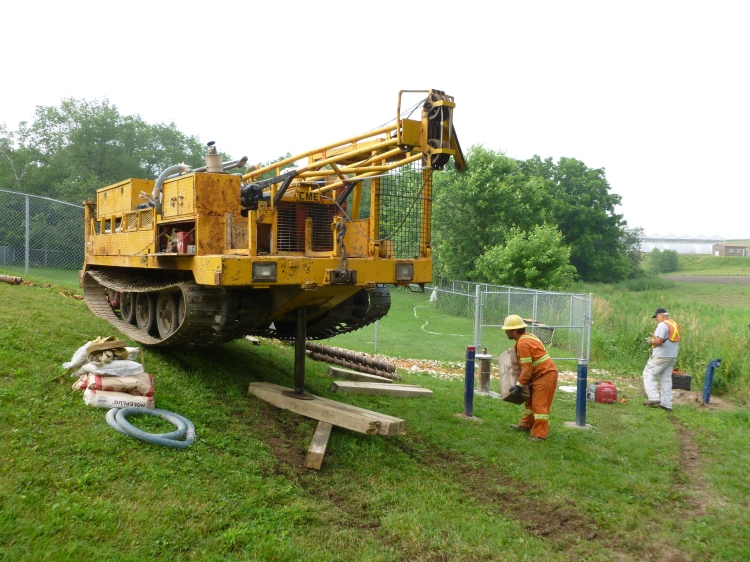 As we drilled, split spoon core samples were collected, logged, photographed, and bagged for analysis later on in the lab. The area primarily consisted of homogeneous runs of medium to coarse grained sand with trace gravel, which made for straight forward logging.

Based on the core samples collected, the elevations of the 7 well screens were then determined in order to avoid any layers of fines. This photos shows the well tubing set out of the grass in an effort to uncoil it while the screens were fastened into place.

Once the desired depth was reached, the wells were installed. This was a very simple process, because intermediate seals between the ports were not necessary. The loose, coarse sand collapsed easily around the screens to provide a representative hydrogeologic environment for that specific depth. Bentonite hole plug was only required  above the shallowest screen in order to adequately protect the aquifer by sealing it, thus limiting an potential for flow conduits from the surface.

Although efforts were made to reverse the augers out of the drilled holes, some sand was still brought to surface. This required some landscaping finesse to bring the site back to its manicured state.

While landscaping slowly restored the surface, the wells were developed. This essentially meant that the wells were pumped at a low rate in order to further collapse the sand around the screens and allow the subsurface to equilibrate. This will be an ongoing process combined with water level measurements to understand the more stable water table conditions prior to the pumping test. 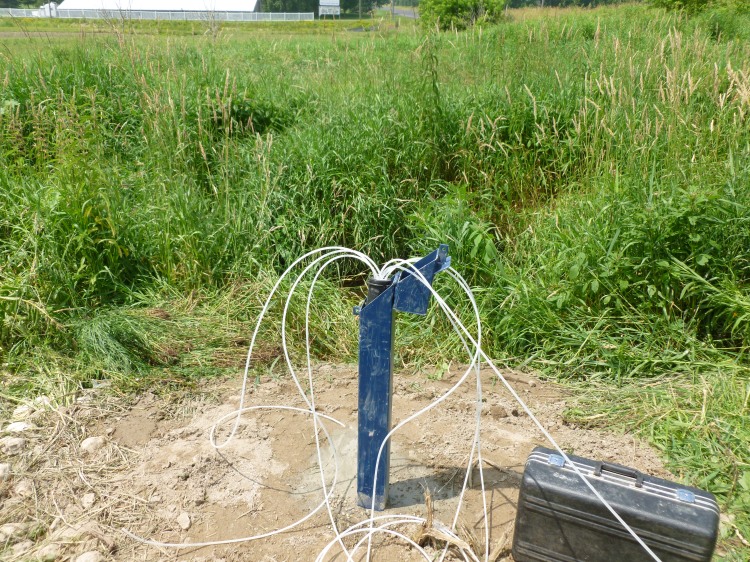 After three days of drilling, logging, installing, landscaping, and well development, our multilevel wells were completed. The finished product looked pretty impressive. I am very excited to see the data this subsurface monitoring network yields.